The History of Cellardyke Harbour and Surrounding Homes

Caiplie Caves, locally known as Caiplie Coves, are a series of caves carved out by the elements over thousands of years, exposing large sandstone outcrops.

The Caves were the site of early Christian worship by monks and pilgrims in the ninth century. St Ethernan, an Irish missionary and his followers set up a base in and around the caves.

St Ethernan moved, with his followers, to establish a monastery on the Isle of May, five miles out in the Firth of Forth.

In 875 AD invading Danes ransacked the monastery and St Ethernan and his followers were put to death.

The island became the destination for pilgrims in the Middle Ages. It is now a National Nature Reserve.

The Cellardyke War Memorial honours the 62 Cellardyke men of the navy and army who fell in the Great War with 1 in 3 of the local men lost in naval service. This ratio was far above the UK as a whole where 1 in 20 of those who died, served in the navy. Although Cellardyke had lost part of a generation of young men, many soldiers and seamen who survived the carnage returned to cope with civilian life once again.

David Keay Brown (1880-1966) joined the Black Watch at the age of 14 and served in South Africa in the second Boer War (1899-1902). He was one of the first to join up at the outbreak of war in 1914 and fought throughout the war. At the conclusion of hostilities in Europe he fought in Afghanistan before returning to become the local postman.

Cardinal David Beaton (1494-1546), Lord Chancellor of Scotland, became Catholic Archbishop of St Andrews in 1539. He sailed by barge to the Fife coast disembarking at the east end of Siller Dyk.

With his retinue, he landed on the large rock formation just off the shore – now called the Cardinal Steps. His final destination was St Andrews, the ecclesiastical capital of Scotland at that time. 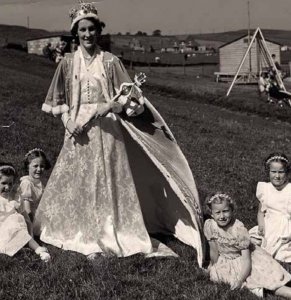 Cellardyke Sea Queen Festival was inaugurated in the summer of 1948 at the Cardinal Steps Bathing Pool. It celebrated the history and heritage of the seafaring community and its relationship with the sea.

In 1972 the crowning ceremony moved to Cellardyke Harbour and continued until 1990. The Festival was revived in 2018. 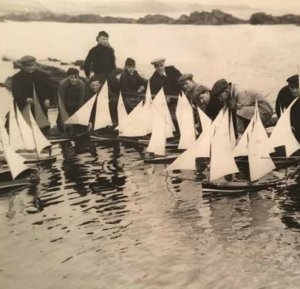 From 1932 until 1959, Cardinal Steps ‘pond’ was used by the East Fife Model Sailing Club. The men meticulously constructed their ‘Fifie’ model boats which were raced against rival clubs in St Monans, Perth and Dundee.

The club had more than 100 members at its peak. 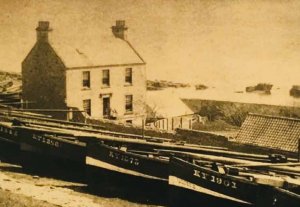 Captain Alec Rodger, famous for the 1866 China Tea Race purchased the land called the Braes at the East End of the town and gifted the land to the townspeople in 1872. Thereafter, it was called the Toon’s Green.

The area was used to lay up the boats at the end of the Lammas Drave fishing season and also for curing and animal pasture.

During the 1930s a group of local residents formed an organisation called Cellardyke Improvements Fund. They held many events to fund the construction of the outdoor swimming pool. It was named Cardinal Steps Bathing Pool after Beaton’s landings at Cellardyke. It was a major attraction for locals and visitors from the 1930s to the 1960s.

Thomas Cormack was one of seven fish curers and coopers operating in 1877. He came from Eyemouth and set up a cooperage along with a fish curing yard where herring, cod and haddock were cured. He also manufactured cod liver oil.

The fish were purchased from the fishing boat crews, gutted, salted and finally packed in wooden barrels to be sent all over Europe and Russia. 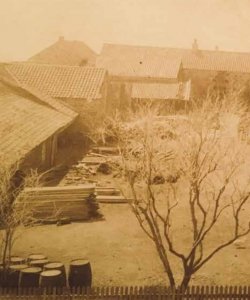 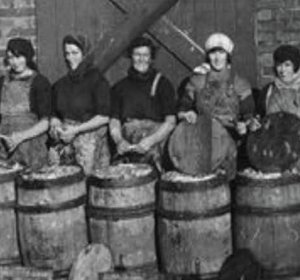 Each year around 5000 Scottish Fisher Lassies travelled from port to port to gut and pack herring. Groups of Cellardyke gutters and packers worked in Cellardyke yards but also travelled all round the Scottish coast and Northern England.