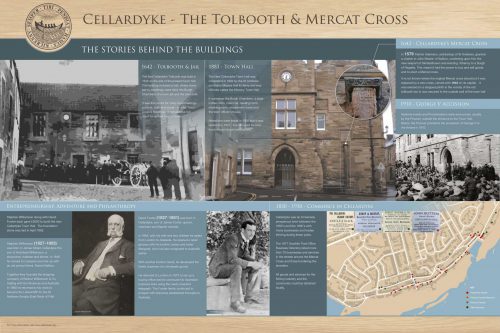 The Stories Behind the Buildings

The first Cellardyke Tolbooth was built in 1642 on the site of the present town hall. The building included a hall, where many penny weddings were held, the Burgh Chambers, the town jail and the town bell.

It was the centre for many local meetings – political, civic and social – and for Town Council Meetings. It remained a civil court for almost two centuries.

The New Cellardyke Town Hall was completed in 1883 by the St Andrews architects Messrs Hall & Henry and was officially called the Kilrenny Town Hall.

It contained the Burgh Chambers, a large coffee room, main hall, reading room, smoking room, amusement room and the town officer’s house. Alterations were made in 1930 and it was restored in 1971. It is still used for civic functions and local celebrations.

In 1579 Patrick Adamson, archbishop of St Andrews, granted a charter to John Beaton of Balfour, conferring upon him the new seaport of Skinfasthaven and erecting Kilrenny to a Burgh of Regality. This meant it had the power to buy and sell goods
and to erect a Mercat cross.

It is not known where the original Mercat cross stood but it was replaced by a new cross, carved with 1642 on its capital. It was erected on a stepped plinth in the vicinity of the old tollbooth but is now secured to the outside wall of the town hall.

National events and Proclamations were announced, usually by the Provost, outside the entrance to the Town Hall. Below, the Provost proclaims the accession of George V to
the throne in 1910.

Stephen Williamson along with David Fowler each gave £5000 to build the new Cellardyke Town Hall. The foundation stone was laid in April 1882.

Stephen Williamson (1827-1903) was born in James Street, Cellardyke the son of Archibald Williamson, ashipowner, maltster and farmer. In 1848 he moved to Liverpool and met up with an old school friend, Robert Balfour.

Together they founded the shipping company of Balfour Williamson & Co, trading with the Americas and Australia. In 1880 he returned to his roots to become the Liberal MP for the St Andrews Burghs (East Neuk of Fife).

David Fowler (1827-1881) was born in Cellardyke, son of James Fowler, grocer, merchant and Baptist minister. In 1854, with his wife and two children he sailed
from London to Adelaide. He opened a retail grocery with his brother James and sister Margaret, who had also emigrated to Australia earlier.

With another brother David, he developed the family business into wholesale goods.

He returned to London in 1873 to set up a buying office and he continued his Australian business links using the newly invented telegraph. The Fowler family continued to prosper with branches established throughout Australia.

Cellardyke was an immensely prosperous town between the 1850’s and the 1930’s with many businesses and trades thriving during these years.

The 1877 Scottish Post Office Business Directory listed more than 70 businesses and services in the streets around the Mercat Cross and those bordering the shoreline.

All goods and services for the fishing industry and the community could be obtained locally. 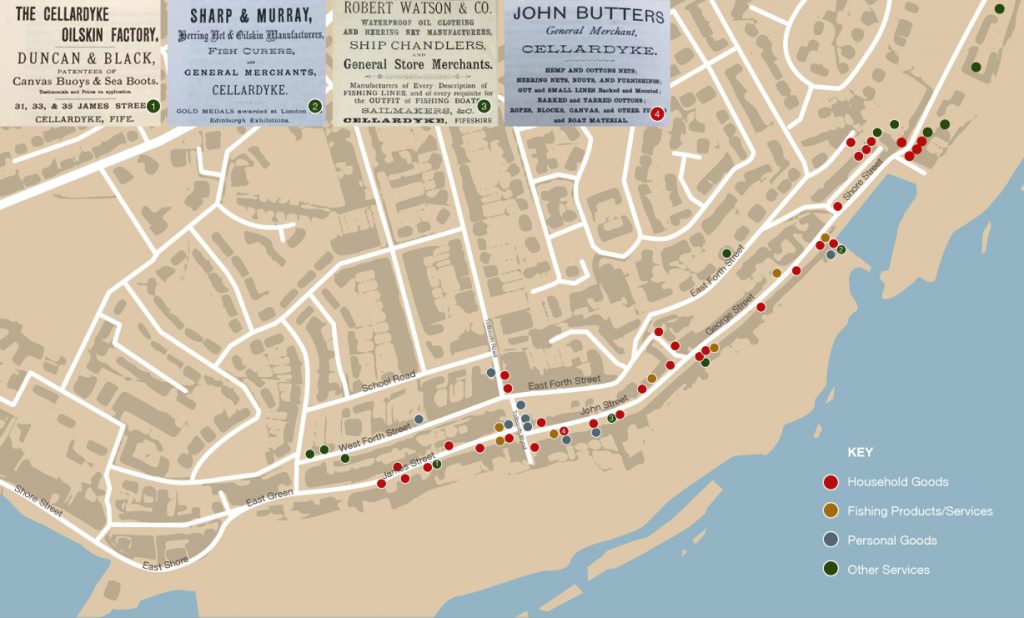